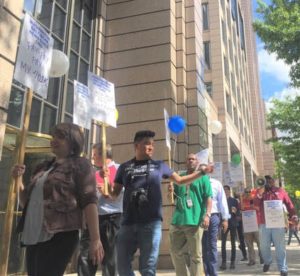 Last week, among the crowd at the sunbaked informational picket line outside the Washington Post at the noon hour, Angela Fritz marched and chanted for a new contract with better retirement security for Post workers. Fritz is a meteorologist, a member of the Capital Weather Gang and the recipient of the Washington Post’s Publisher’s Award for her hurricane coverage last month. She shared the honor with fellow Capital Weather Gang reporter Jason Samenow. “It’s very simple and straightforward,” said Fritz about her membership in the Washington-Baltimore News Guild. “The Guild is negotiating on my behalf. Everything the Guild does is to my benefit. I wouldn’t feel good not joining the people who are negotiating for me.”  Fritz, who has worked at the Post for three years, says she doesn’t think much about where she’ll be in 10 years, much less where and how she’ll retire. That’s one reason why the Guild has such a sharp focus on retirement benefits, which management at the Post has been attacking in recent contracts, including ongoing contract talks. She says she’s proud to work at the Post and loves how journalism provides a public service. “I feel a responsibility to our readers and our followers, to make sure they have the best information possible. So many people put in more than their fair share of work every day, and I think it translates into excellent journalism and coverage,” Fritz said.