Jon Schleuss, candidate for president of the NewsGuild-CWA, is going to visit WBNG Local 32035 headquarters this Monday, Feb. 25 at noon to say hello to us. Jon is providing a light lunch.

The current president, Bernie Lunzer, is running for reelection, and we have invited him to visit also. Bernie will get back to us with a date soon.

Individual officers, delegates, or members may endorse either candidate, but, as a local, we are committed to providing equal treatment to both candidates.

Here is an article from the NewsGuild about the race.

The Washington-Baltimore News Guild will have a new treasurer for the two-year term that starts Jan. 31. Justin Moyer of the Washington Post defeated incumbent treasurer Tim Fitzgerald of the American Postal Workers Union, 303-76, in mail voting by WBNG members earlier in January.

Balloting was conducted entirely through the mail — which may be a first in WBNG history — by the American Arbitration Association, as authorized in the fall by the WBNG Executive Council. Tabulation of the ballots was conducted Jan. 29 in WBNG’s Washington office under the direction of the local’s Election and Referendum Committee: Mark Pattison (Catholic News Service), chair; Tammara Madison and Peter Brusoe (BBNA), Amy Lampkin (AFL-CIO) and Sam Nelson (Jobs With Justice), members.

Of WBNG’s 1,694 members, 394, or 23.28 percent of the electorate, cast ballots. This does not include four other ballots, which were spoiled and could not be counted. There were no challenged ballots in this election.

Photo and story by Chris Garlock 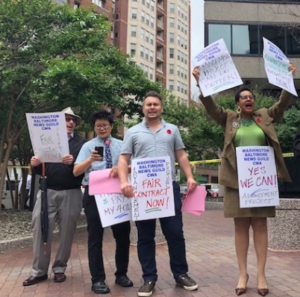 Monday’s chilly temperatures were the perfect time to “turn up the heat” at the Advancement Project, where the NewsGuild has been negotiating a contract for nearly a year.

“We’re tired of the lack of progress,” said the AP Union Bargaining Committee, which organized two pickets at AP’s board meeting yesterday.

“July will mark one year of negotiations, and management is still dragging their feet. With no commitment to wage increases, no substantive concessions, and slow movement from management, it’s time to turn up the heat.”

Following the actions, the bargaining committee met to finalize counterproposals in anticipation of resuming bargaining at the end of the month.

The Executive Council of the Washington-Baltimore News Guild voted unanimously to adopt a new credit card policy at its monthly meeting on May 23.

The policy doesn’t significantly alter the way our two credit cards will be used, because there is no evidence that they’ve been used improperly, but the policy clarifies how our union’s money can be spent and expressly lays out how members can review the local’s financial information, including receipts.

EC member Steve Cook led the committee work, which included research into guidelines from the Department of Labor and local union resource materials from the Communication Workers of America. His leadership set a fresh and collegial tone for the work and helped lead a committee with an array of input from rank-and-file members and EC members alike.

“We should all be proud of this credit card policy,” said WBNG President Robert Struckman. “Steve Cook did a wonderful job as chair. All of us should continue to push for accountability and transparency at our union. It will strengthen us and give members assurances that we can be a union that’s ready to meet the challenges of the 21st Century.”

Bill Monroe of the CPA firm Haley and Associates will be on hand to answer questions and discuss financial governance and related issues of the Washington-Baltimore News Guild at our upcoming Executive Council meeting on April 7 at 10 am at the union office in Suite 300 at 1225 I Street NW in Washington.

As the new president of the WBNG, I sat down with Monroe to talk about his ideas on ways we can use better financial governance to increase transparency and accountability, and to create systems that allow us to do more.

For instance, we could use 50/50 raffles to raise money for gas cards, so out-of-area members could drive to membership meetings. We could offer shirts or other union-themed items to activists or for sale. First, though, we need our membership to authorize it and set up procedures to collect and disburse the money. It’s as simple as that.

The Department of Labor says five years of financial information must be available to any member upon request.

Monroe expressed tremendous confidence in the WBNG staff and the integrity of the WBNG system for tracking expenses, receipts and other relevant information. He expresses this opinion because his firm produces an annual audit based on testing a random and representative number of expenses in our file.

Monroe pays particular attention to things things like credit cards that are vulnerable to abuse. Monroe’s firm has handled the WBNG finances for more than 15 years, and his firm specializes in labor unions.

At our meeting, Monroe will discuss the production of a cost-efficient review of our union’s finances, with interested union members as collaborators. This review could look over the past five years, and it would lead to a report, which would be available to any member who wants it.  The review would also include recommendations for items to be included in a policy and procedures manual, which would, if adopted by the local, give clarity and authorization to our financial picture. Here is a link to sample policies and procedures our union could draw from.

You can attend our upcoming meeting in person or by phone. It is an general membership meeting, every members can vote, and all members are welcome. All members can speak to issues. If you have any questions or concerns prior, please feel free to reach out to me via email at rjstruckman@gmail.com.