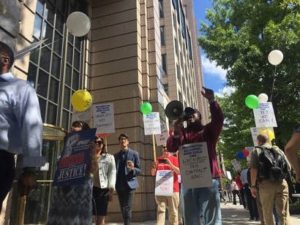 Despite unseasonably warm temperatures and a blazing noonday sun that ratcheted up the heat even more, nearly 100 News Guild union members and their supporters turned out for a spirited picket line Sept. 27 in front of the Washington Post on K Street. The union’s trademark balloons floated gaily above picket signs as chants rang out, demanding “What do we want? A contract! When do we want it? Now!” Post unit co-chair at the Washington-Baltimore NewsGuild Local 32035 Fredrick Kunkle told the crowd that “The man who owns Amazon should not be sending his employees up the creek.” Noting that the Post has been setting new records for readership, “thanks to the hard work of everyone on the team, from the reporters to the guys who drive the trucks. All we’re asking for is a reasonable pay raise from the richest man on the planet, for an institution that’s important for democracy.”